The lyre harp is a string instrument known for its use in Greek classical antiquity and later periods. The lyre is similar in appearance to a small harp but with distinct differences. In organology, lyres are defined as “yoke lutes”, being lutes in which the strings are attached to a yoke that lies in the same plane as the sound-table and consists of two arms and a cross-bar.

In Ancient Greece, recitations of lyric poetry were accompanied by lyre harp playing. The earliest picture of a lyre with seven strings appears in the famous sarcophagus of Hagia Triada . The sarcophagus was used during the Mycenaean occupation of Crete.

The lyre of classical antiquity was ordinarily played by being strummed with a plectrum (pick), like a guitar or a zither, rather than being plucked with the fingers as with a harp. The fingers of the free hand silenced the unwanted strings in the chord. Later instruments, also called “lyres”, were played with a bow in Europe and parts of the Middle East, namely the Byzantine lyra and its descendants. 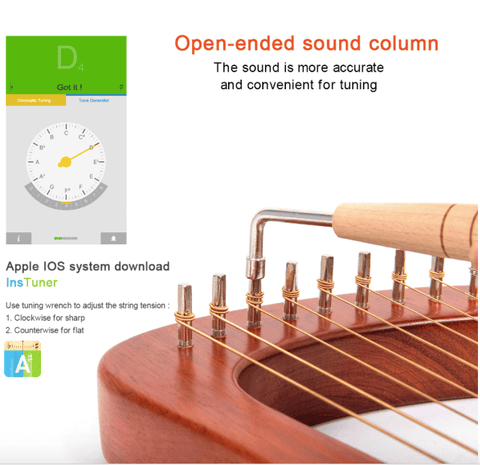 Notice:
All images and descriptions are for illustrative purposes only. Product specification, functions and appearance may vary by actual usage. The color deviation is subject to actual system configuration and slight dimension difference is allowed due to manual measurement. We recommend you could check with sales for exact offers if need.
Share Share on Facebook Tweet Tweet on Twitter Pin it Pin on Pinterest
Kasidi R.
It's perfect! I got it as a gift for my dad and he loves it! Thank you :-)
Marita M.
nice little first time lyre harp investment ... comprehensive package all the bits to get you running ... tunes easy ...nice to look at and sound is pretty good again in light of decent price ... super expedient delivery ..how nice is that??
Deanne T.
I chose the 15 string in red mahogany and it is beautiful! I love the sound and it was easy to tune using the recommended app. I had a few questions before ordering and received answers quickly. They were able to add an additional set of spare strings to my order easily. It shipped quickly with no issues/damage.
Kelsey K.
I LOVE it! So beautiful. Plays beautiful. Just had to tune it a bit as expected, but with the tool provided, its fairly easy :) i’ve been looking for a smaller harp-type thing for a while and finally came across this gem! Also, great costumer service. I accidentally ordered too many of one item and they responded and canceled it immediately! And when i ordered more stuff they made sure it was intentional. Zero stress. Packages came sooner than expected as well! A pleasant surprise. Five stars for this experience! Thank you, Go Kalimba!
J***i
I am really very favorably surprised, Super somehow workmanship, and super fast delivery with fajnym gratisem☺️